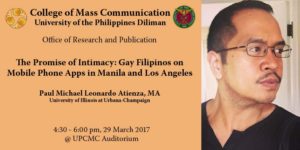 Despite the long established presence of cinema in Southeast Asia, initiatives to institutionalize film archiving in the region began only in the 1970s and most of the major activities in realizing the creation of viable archives gathered momentum only quite […]

Plaridel: A Philippine Journal of Communication, Media, and Society, published by University of the Philippines College of Mass Communication since 2004, invites scholars from various disciplines to submit original researches for its special […]