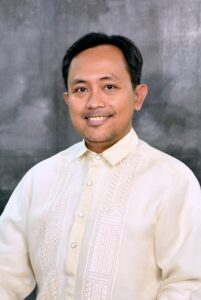 Fernando de la Cruz Paragas, Ph.D. is Dean of the University of the Philippines College of Mass Communication (UP CMC) and a Professor at its Department of Communication Research.

He completed his PhD degree in Mass Communication at Ohio University as a scholar of the Fulbright program of the United States of America. Dr. Paragas earned his MA in Urban and Regional Planning, for which he received a Dean’s Medallion, and BA in Communication Research, where he received the Best Undergraduate Thesis Award, at UP Diliman. Dr. Paragas had taught at the Wee Kim Wee School of Communication and Information at the Nanyang Technological University, Singapore.

He has a cumulative total of over 100 academic publications, competitive conference papers, commissioned studies, and invited presentations. He has received several international publication awards, two UP Diliman Centennial Professorial Chair awards, and a OneUP Professorial Chair Award for Teaching and Research. Dr. Paragas was a recipient of the Gawad Tsanselor sa Natatanging Guro in 2019 and a Gawad Chancellor para sa Natatanging Website in 2001.

He is a member of the UP GE Program Evaluation Technical Working Group and the University Council Committee on Instruction. He is also the Convenor of the Program on Higher Education Research and Policy Reform at the UP Center for Integrative Development Studies and the President of the Philippine Association for Communication and Media Research, Inc. 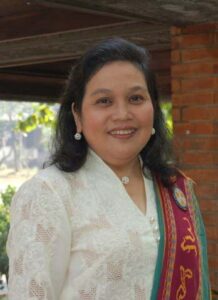 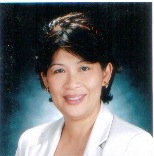 Elena Enriquez Pernia, Ph.D. has over twenty years of experience in communication/media education, research, planning and evaluation. Her highly distinguished academic career focuses on building the capacity of students, local governments, health professionals, and civil society organizations to design, implement, and evaluate their own communication programs. Dr. Pernia is currently Professor of Communication at the University of Philippines’ College of Mass Communication (UP-CMC) in Diliman, where she handles undergraduate and graduate (M.A. and Ph.D.) courses in communication/media theory and research, design and methods, quantitative and qualitative analysis, communication project planning and development. From June 2006 to May 2009, she served as UP-CMC Dean. She has authored several books, among them Communication Research in the Philippines: Issues and Methods which has become a standard text book in research classes in the several universities. An evaluation specialist, she consults on projects related to audience research, media effects, strategic communication planning and evaluation, and development communication. She is also a leading trainer in strategic communication and leadership. Since 2012, Dr. Pernia has been the Conference Head of the annual National Communication Research Conference. The NCRC is venue for students, teachers, and professionals in communication and media to present and share their research findings, to meet and network. Began in 2007 as the Communication Research Student Conference (CRSC), the NCRC turned national and expanded participation to include communication and media teachers and professionals in January 2012.  Participation in the NCRC has been upwards of 400 students and faculty members from colleges and universities in Luzon, Visayas and Mindanao. The NCRC received the Gold Quill Award of Excellence as well as the Top award in the Communication Training and Education category in the 2015 Quill Awards of the International Association of Business Communicators (IABC). Dr. Pernia sits on the Executive Boards of the Philippine Center for Communication Programs (PCCP), the Pi Gamma Mu International Honor Society, Philippine Alpha Chapter, and the Social Science Division of the National Research Council of the Philippines (NRCP). Until recently, she was on the boards of Singapore-based Asian Journal of Communication, the International Communication Association (ICA). She also served on the Editorial Board of the Communications Review of the University for Asia and the Pacific (UA&P). Since June 2012, Dr. Pernia has served as Readers’ Advocate or News Ombudsman at the Philippine Daily Inquirer (Inquirer Group of Companies). As Readers’ Advocate, she “serves as an in-house critic to ensure that the principles of accuracy and fairness are followed while promoting meaningful interaction between the editorial staff and the readers.” (from: http://lifestyle.inquirer.net/51951/readers-advocate-up-professor-fills-long-vacant-inquirer-post) 2009 to 2015 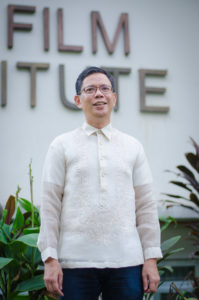 Rolando B. Tolentino, Ph.D. is Dean of the University of the Philippines College of Mass Communication and faculty of the University of the Philippines Film Institute. He has taught at Osaka University and the National University of Singapore, has been a Distinguished Visitor at the University of California, Berkeley, and at the University of California, Los Angeles Southeast Asian Studies Consortium, and a recipient of the Obermann Summer Research Fellowship. He is a member of the Manunuri ng Pelikulang Pilipino (Filipino Film Critics Group) and chairs the Congress of Teachers and Educators for Nationalism and Democracy (CONTEND-UP). Dean Tolentino earned his doctorate in Film, Literature and Culture at the Critical Studies Division, School of Cinema-Television at University of Southern California on a Fulbright grant in 1997. He also have Ph.D. units in American Cultural Sutdies at Bowling Green State University in 1993. Dean Tolentino completed his MA in Philippine Studies and AB-Economis, BSC-Accounting at De La Salle University in 1991 and 1986, respectively. Dean Tolentino is a prolific writer, author and editor on film, culture, and politics. Among his scholarly works are: Co-editor, A Reader in Philippine Film History and Criticism: Essays in Honor of Nicanor G. Tiongson (Quezon City: University of the Philippines Press, 2014); Co-editor, Salita ng Sandata: Bonifacio’s Legacies to the People’s Struggles (Quezon City: ACT/CONTEND and Ibon Books, 2013); Co-editor Serve the People: Ang Kasaysayan ng Radikal na Kilusan sa Unibersidad ng Pilipinas (2008); National/Transnational: Subject Formation and Media in and on the Philippines (2001); Sa loob at labas ng mall kong sawi/kaliluha’y siyang nangyayaring hari: Ang Pagkatuto at Pagtatanghal ng Kulturang Popular (The Pedagogy and Performance of Popular Culture in the Philippines, 2001); Geopolitics of the Visible: Essays on Philippine Film Cultures (editor, 2000). Among his books of fiction and other creative output are: Co-editor, Like/Unlike: Kuwentong Facebook at Politika ng Agam-agam (2014), Co-editor, Transfiksyon Mga Kathang In-Transit (2014), Almanak ng Isang Aktibista (2011), Mondo Marcos (Filipino and English volumes, 2010), Co-editor, Pagtatagpo sa Kabilang Dulo: Panitikang Testimonial ng Desaparecidos (2009); Sapinsaping Pag-ibig at Pagtangis: Tatlong Novella ng Pagsinta’t Paghinagpis (1999); Fastfood, Megamall at iba pang kwento sa pagsasara ng ikalawang milenyum (1999); Habilin: Antolohiya ng Katha Para sa Pambansang Kasarinlan (co-editor, 1991); Engkwentro: Kalipunan ng mga Akda ng Kabataang Manunulat (co-editor, 1990). He has written critical essays, conference papers and discussion on various issues published in many journals and delivered in conferences locally as well as internationally. Dean Tolentino is a recipient of various fellowships and awards including Gawad Balagtas, Unyon ng Manunulat sa Pilipinas, (2013), UP Press Centennial Publication Award (2008), UP Centennial Professorial Chair (2013-14, 2012-13, 2011-2012, 2010-11), Awardee, National Book Award for Personal Anthology, Almanak ng Isang Aktibista, National Book Development Board (2012), UP Press Centennial Publication Award, Sapinsaping Pag-ibig at Pagtangis: Tatlong Novella ng Pagsinta’t Paghinagpis (2008), National Book Award for Best Literary Criticism, Sipat-Kultura, Manila Critics Circle (2008), UP Creative Work Grant, Creative and Research Scholarship Fund (2008), Visiting Research Fellow, Center for Southeast Asian Studies, Kyoto University (2008); Distinguished Visitor, UC-Berkeley and UCLA Southeast Asian Studies Consortium (2006), Visiting Fellow, Sociology Department, National University of Singapore (Jul 2005-Dec 2006), Obermann Summer Research Fellowship (2004), Best Arts Book, Gintong Aklat, (2002), UP International Publication Award (2000, 2001, 2002, 2003); Henry Sy Professorial Chair (1998-1999); Carlos Palanca Memorial Awards for Literature (1998, 1994, 1991); All University Predoctoral Merit Fellowship, USC (1993-1996); Fulbright Grant to pursue Ph.D. in area of Critical Theory and Cultural Studies (1992-1996). 2004 to 2009 Nicanor G. Tiongson, Ph.D. He is professor emeritus at the UP Film Institute of the College of Mass Communication (CMC), University of the Philippines Diliman. He served as dean of the CMC in 2003-2006, and during his term established Plaridel, then the only refereed journal of communication, media and society, and  the Gawad Plaridel, the highest recognition given by the University of the Philippines to outstanding media practitioners. While serving as vice president and artistic director of the Cultural Center of the Philippines in 1986-1994, he initiated and implemented the policies of Filipinization, democratization, and decentralization of the premier cultural agency.  He also served briefly as chair of the MTRCB  in  2001. He is a founding member and former chair of the Manunuri ng Pelikulang Pilipino. He co-founded the Cinemalaya Independent Film Festival and served as its congress director for eight years.  He was  visiting professor at the University of Hawaii-Manoa, the Osaka University of Foreign Studies, and University of California Berkeley.  He taught Philippine literature and theatre courses at the UP College of Arts and Letters from 1974 to 1986 and courses on the Filipino cinema and film theory at the UP Film Institute from 1999 to the present. He has also taught courses on Philippine literature, theatre, and film at Ateneo de Manila University and De La Salle University. He was director and convenor of the international conference Sangandaan, which focused on the Philippine-American relations in arts and media from 1899 to 2003.

He published ground-breaking studies  on Philippine traditional theatre forms, like the komedya,sinakulo and sarsuwela, among them the Kasaysayan at Estetika ng Sinakulo at Ibang Dulang Panrelihiyon sa Malolos and Kasaysayan ng Komedya sa PIlipinas : 1766-1982. His  books  on the Filipino cinema include  the four  volumes of The Urian Anthology, which document  the history of the Filipino cinema from 1970 to 2009 through  an anthology of articles, reviews,  interviews, and a filmography;  and the pioneering  The Cinema of Manuel Conde.   He edited and published the 10-volume CCP Encyclopedia of Philippine Art and the 30-part Tuklas Sining monographs and videos on the Philippine arts. He edited Pelikula, a journal of the Filipino cinema in 1999-2001 as well as three issues of Plaridel journal.

He has written full-length plays like Pilipinas Circa 1907, Noli at Fili Dekada 2000, Basilia ng Malolos, Labaw Donggon : Ang Banog ng Sanlibutan, and Mabining Mandirigma, dance librettos likeSiete Dolores,  Adarna,  Gatlaya, and Realizing Rama, as well as scripts for documentaries on Philippine theatre, costumes, and festivals.  In 2014, he wrote and produced the musical docudrama, Ang Kababaihan ng Malolos / The Women of Malolos, based on his book The Women of Malolos.

His works have received awards from the Manila Critics Circle, the Gawad Chanselor of UP Diliman, the Surian ng Wikang Pambansa, the National Research Council of the Philippines,  and  the National Book Development Board of the Philippines.  He was the recipient of several UP professorial chairs, the Outstanding Professor award from UP Diliman, the Fulbright Professional and Senior Researcher grants, the Freeman Foundation grant, the senior research fellowship from the Center for Southeast Asian Studies of Kyoto University, and the research fellowship of the Japan Foundation. He received  the Gawad CCP para sa Sining for Cultural Research and Administration, the CCP Centennial Honors  for  the Arts, the Gawad Tanglaw ng Lahi of the Ateneo de Manila University,  the Patnubay ng Sining at Kalinangan from the City of Manila,  the rank of UP Artist III in 2009-2011, the Grant Goodman Prize for Historical studies in 2015, and the Philstage Gawad Buhay for the libretto of Mabining Mandirigma in 2016.